Hamilton the musical in London

The modern musical masterpiece – Hamilton has taken the West End by storm… and we’re taking you there!!!

It’s the story of America’s Founding Father Alexander Hamilton, a West Indies immigrant who became George Washington’s right-hand man during the Revolutionary War, the show follows his epic journey. Starting as a child born out of wedlock, his marriage to a wealthy heiress, Hamilton goes on to become America’s first Treasury Secretary, ultimately leaving a vast legacy in forging the country’s financial system.

A sung- and rapped- through musical, Hamilton’s score fuses hip-hop, jazz, blues, rap, R&B and Broadway to tell the tale of a leading figure at a crucial juncture for America.

Departing South Wales we head along the motorway, taking a coffee stop along the way before arriving in London and stopping as close as we can to the theatre at lunchtime on day one to allow you plenty of time for a bite to eat before your matinee theatre performance begins.

As the curtain falls we’ll be around the corner waiting to take you out of central London to your hotel for your overnight stay with evening meal & breakfast included.

The following morning we’ll head back in to central London for the day.

Departing at 3pm for a late evening return home

Included with your break
Pick Up Points
"I highly recommend Jones the Bus.
We had a family 2 day trip (6 adult women) to Harry Potter studios and Windsor.
Booking was easy and communication great our driver James was just fantastic. We throughly enjoyed the whole experience and made memories to last a life time.
Thank you from Alethea & Family x"
Alethea 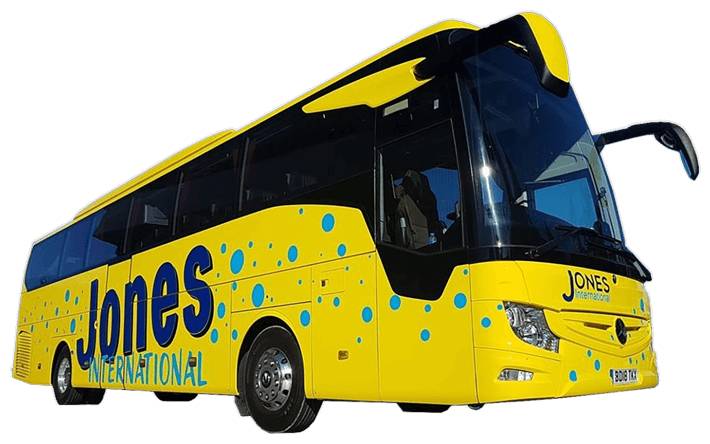 Join our mailing list
Want to be the first to know when we have special offers and last minute deals?